Just You Wait What We Have For You.

A whole new format, unlike any other online KISS sites, KISS MASK will not place it's focus on minute to minute KISS News. KISS MASK will be interesting, offer an entirely new fan experience.

If you want the news, you can go to KISSONLINE, or the many sites that are in the KISS Universe.

Relaunch date is not set as we are working on the new format as we speak.

We can't wait until you experience the new KISS MASK! 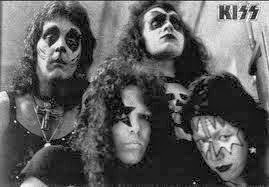 Posted by Unknown at 8:51 AM No comments:

Hello fellow KISS fans. After a year long + illness, KISS MASK will be returning. We are currently working a new look as well as a new approach. Stay tuned!

Posted by Unknown at 8:24 AM No comments:

If KISS MASK will and when it will make a return. I have received an enormous amount of emails questioning KISS MASK making a return. At this point, I must take care of my ailing father. He needs me. That is the reason I decided to close KISS MASK.

You're thrown curve balls in your life and you must do what you have to do.
The overwhelming amount of emails have taken me by much surprise. Will KISS MASK come back?

Well, I've always said "never say never." And your input has made me re-think about the future of KISS MASK. I do not want to be one of those KISS sites that is only active when KISS is on tour. I don't want KISS MASK to be a webzine that can't be dedicated 100% to it's readership.

So, right now, I will call it a break and we'll see where we are at in the weeks ahead.

Thank you for all of your emails and input.


To our faithful KISS MASK readers and the KISS ARMY,

As I previously announced on KISS MASK's Facebook page, today is the last day KISS MASK will be an active webpage. My life's journey has taken a sharp turn and I can no longer devote 150% to KISS MASK. It wouldn't be fair to keep MASK going, for our reader's and for myself, just for the sake of just "keeping it going."

I want to thank everyone who has supported KISS MASK over the year's - in print back in the 1980's and 1990's and in 2008 when KISS MASK was reborn as a webpage as you see it today.

So, again, thank you for everything. See you at the KISS shows in the near future. 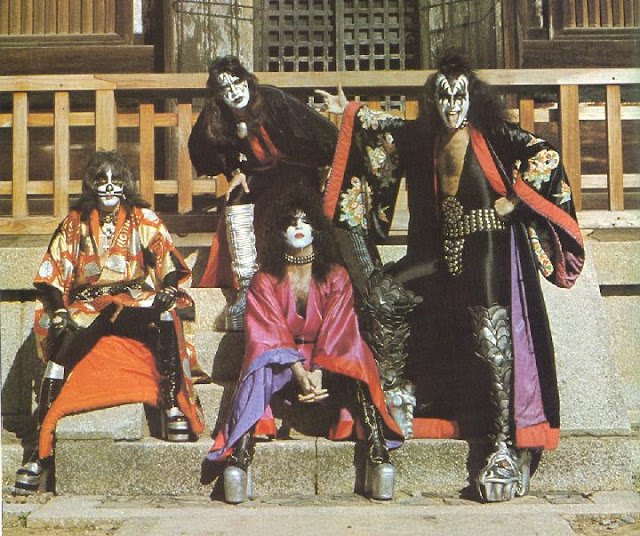 Lick It Up
I Was Made For Lovin' You
Rock And Roll All Nite
Posted by Unknown at 6:57 AM No comments: 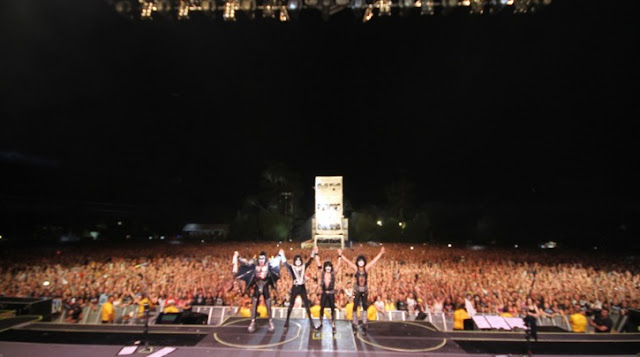 Posted by Unknown at 6:45 AM No comments:

KISS played the Clipsal 500 in Adelaide Sunday night. There were some technical issues such as the one you see below with Gene's flying rig. Also a fire broke out on one of the lighting rigs where it had to be lowered for the crew to extinguish it prompting Paul to sing "Light My Fire." Both videos can be seen below.

Posted by Unknown at 6:34 AM No comments:

SOME of KISS’ staging staff may be lined up outside the unemployment office in Perth this morning – but the first-night gaffes did absolutely nothing to detract from a dazzling performance by the veteran glam rockers.

Bassist Gene Simmons, in full battle regalia and dangling from cables, was forced to crawl onto his platform 15 metres above the Perth Arena stage before performing “God Of Thunder” on the first night of the Monster Tour, which also included a disappointing Motley Crue and feisty Thin Lizzy.

The microphone cut out during Simmons’ 35-year-old pre-amble to the song, forcing him to say “well alright” twice.

When guitarist Tommy Thayer “shot” balls of fire from his instrument during his solo turn, the explosions in the overhead rig were nowhere near where he was aiming. The flashpots during the “clap” breakdown of “I Was Made For Loving You” were so out-of-synch that singer Paul Stanley was left with a bemused expression.

Simmons stumbled over some of the lyrics from the welcome setlist inclusion of 1982′s “War Machine”, singing at one stage “Strike down the one who leads me/Let the arrows fly”. Additionally, the mix during Thayer’s vocal turn on “Outta This World” was tinny and Simmons’ bass was almost inaudible during his own turn on vox with another newy, “Wall Of Sound”.

But only the afficonado would have spotted such flaws. With Eric Singer on drums completing the current line-up, KISS tendered one of their most accomplished performances ever on Australian soil.

Songs which many of us have carried in our heads longer than we have retained most worldly posessions, like “Calling Dr Love” and “Black Diamond”, suddenly assumed a new life thanks to the crunching delivery while the 99 per cent of staging which did work was mind-bogglingly spectacular.

The $250-a-head ‘Monster Madness’ zone was under-patronised, giving those in the area the surreal opportunity to walk casually around sipping a drink as the encore finished with Simmons and Thayer pushed out over their heads by extending cranes and Stanley smashing his guitar on a mid-stage platform amid twirling fireworks – all as confetti rained down.

Even diehard KISS fans mock the band’s mercenary ways but it was apparent as one made one’s way out of the brand new venue late on Thursday that Simmons and Stanley managed to trap lightning in a bottle four decades ago this year.

They have never had the cork jammed more securely in that bottle than it is now as they enter their 41st year of quasi-religious bombast in career-best form.

Irish veterans Thin Lizzy attracted some 65 per cent of the total audience for their early set and managed to get fans even in the back row of the cavernous arena on their feet for classic rock hits like “Rosalie”.

Folk music standard “Whiskey In The Jar” was a highlight, with former Almighty frontman Ricky Warwick having little trouble winning over the crowd with his energetic stage presence and rock poses in an hour-long set that climaxed, predictably but pleasantly, with “Boys Are Back In Town”

That Thin Lizzy respect their audience enough to change their name before releasing new material is an enormous testament to the integrity of long-standing members Scott Gorham, Brian Downey and Darren Wharton. They come across as sincere enough not to have gone to the trouble.

Members of Motley Crue walked through the audience to the stage before opener “Saints Of Los Angeles” and their set was half over before it became anything better than terrible.

The mix was so muddy that a brontosaurus could have been buried in it. Had they bothered to soundcheck? It was if drummer Tommy Lee’s DJ set at a local nightclub had started early.

The distortion and heavy bass was almost unbearable, singer Vince Neil’s delivery nonchalant and there was a palpable lack of emotion until drummer Lee’s ride on his drum rollercoaster.

It is just as well no glass was allowed inside Perth arena, as much of it would have shattered with some of the bum notes hit by Neil during “Don’t Go Away Mad (Just Go Away)”. The high-fives and handshakes that proceeded “Home Sweet Home” appeared wan and routine.

Even when the band returned for “Live Wire”, the Crue seemed to be going through the motions in the most isolated city in the world outside of Siberia. But with “Primal Scream”, the mix improved and the musicians’ minds seemed to be finally on the job.

A semblance of groove and momentum finally imbued their set in the run through “Dr Feelgood”, “Girls, Girls, Girls” and “Kickstart My Heart”, the performanc rescued from being a complete shambles. But for a “coheadliner”, Motley Crue sounded and looked like an apathetic opener.

Guitarist Mick Mars’ concerns. aired last year, that Motley Crue are not making the right decisions for their legacy appear well-founded. This often seemed like tiredly-delivered nostalgia from a titan of the Sunset Strip era.

This reviewer has been watching both bands live for 23 years. This was KISS’ best performance in that time – and Motley Crue’s worst.
Posted by Unknown at 10:12 AM No comments:

On March 9, 2013, founding KISS drummer Peter Criss will be honored by The American Cancer Society as Humanitarian of the Year at this years Hope Lounge gala.
Click HERE for more information. 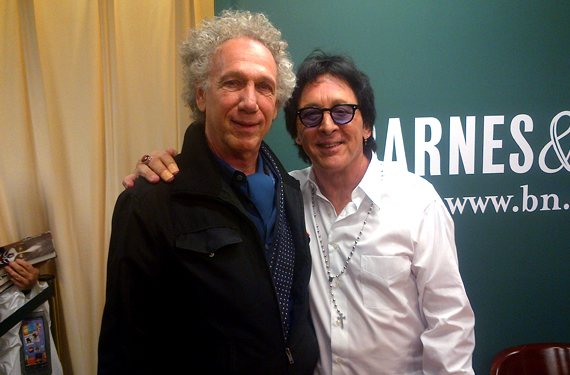 Photo: Rock Photographer Legend Bob Gruen and Peter Criss 2012.
Posted by Unknown at 10:06 AM No comments:

Check out this full video of KISS performing "Black Diamond" at Perth Arena, 2/28/13.
Posted by Unknown at 9:53 AM No comments:

Here is another view of KISS' performance in Perth, February 28, 2013 of "Detroit Rock City."
Posted by Unknown at 9:48 AM No comments:

Classic rock is about heavy hooks, power chords, and tight harmonies, but it’s also about letting loose and enjoying the good times — and there’s no better time than Friday evening, when we pick up our paycheck, punch out of work, and enjoy a couple days of much-needed rest and relaxation.

Today, we’re paying tribute to one of rock’s all-time greatest party anthems, from one of the genre’s most prominent ambassadors of good times and easy living: ‘Rock and Roll All Nite,’ the Kiss song that originally graced the charts in 1975 — twice, with two different versions — on its way to becoming one of the band’s signature numbers and an enduring musical manifesto for anyone who’s ever felt like abandoning their responsibilities for a day or two.

Which is, perhaps not coincidentally, probably exactly what the guys in the band felt like doing in 1975, when Casablanca Records president Neil Bogart pulled the plug on their ‘Hotter Than Hell’ tour and summoned them back to the studio to record a quickie follow-up. With the label on its last financial legs and in desperate need of a hit, Kissmates Gene Simmons and Paul Stanley were dragooned into writing what Bogart referred to as “an anthem or rallying cry for our fans.”

As Stanley later recalled, “When I came up with the chorus for ‘rock and roll all night, and party every day,’ I knocked on Gene’s door and said, ‘I think I’ve got it, this so-called anthem we need.’ Gene came and said, ‘Well, I have this song, ‘Drive Me Wild.’’ We put them together and lo and behold had a song that spawned a whole viewpoint, which was writing a song that embodied the philosophy of the band and the people who love the band.”

And that’s pretty much it in a nutshell. In fact, ‘Rock and Roll All Nite’ sums up the Kiss ethos that it’s kind of surprising the song didn’t spontaneously write itself the day the band was formed — and that when it was initially released as a single, it peaked at a lowly Number 57 on the Billboard charts. It wasn’t until later in 1975, when it resurfaced as a single from their breakthrough ‘Alive!’ album, that ‘Nite’ really took off, shooting up to Number 12 and cementing its status as the anthem Bogart was looking for.

‘Rock and Roll All Nite’ heralded the band’s arrival as one of the most successful rock bands of the ’70s, kicking off a string of Top 20 hits and platinum records and providing the group with a permanent set-closing number for its shows. It’s also a pretty good way to wave goodbye to the work week, so you know what to do — just hit that ‘play’ button on the video below, crank up the volume, and let the weekend start…now.

Posted by Unknown at 9:34 AM No comments: 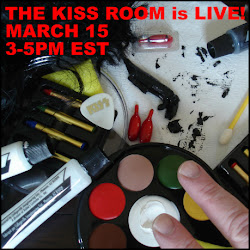